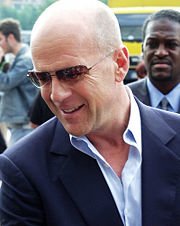 Men are at a greater risk of baldness than women
Baldness of the scalp, beginning with a receding hairline and thinning of the crown, is one of the worst fears of the human kind, particularly men.

Hair loss or baldness can occur in two ways - Patchy or localized and overall.

There are some conditions which cause the loss of pair in small patches. Some common reasons for this are –

Where hair loss is not localized and happens everywhere, the reasons could be –

[edit] All about baldness

A fully grown adult normally loses about 10,000 scalp hairs every day, which gets replaced. Hair grows at an average rate of about 0.5 inch per month. Each hair grows for 2 to 6 years, rests for a while and then falls out. A new hair soon begins growing in its place. At any one time, about 85% of the hair is growing and 15% is resting. It is when the loss is not balanced by the growth of new hair, that baldness occurs. The most common area where it is seen is at the temples and /or on the crown or top of the head

There are a number of reasons for hair fall but the most common cause among men is Male pattern Baldness. It happens because of the effect of male hormones on the follicles of hair. The male hormone called testosterone gets converted to dihydrotesttosterone by an enzyme, which is what affects the hair follicles. In the beginning they slow the growth of hair and reduce the quality ( the hair produced is weak and shorter) and gradually it stops the growth itself. Most men are genetically predisposed to it. And it is not caused by excessive shampooing or poor circulation

Though less common, Female pattern baldness involves a typical pattern of loss of hair in women, caused by hormonal imbalances, aging, and genetic predisposition. It also happens in some women after menopause

Other possible reasons are:

There are a number of methods to treat baldness, depending on the type of baldness. It is important to however diagnose the reason well.

The conventional medicine includes the drug called Minoxidil. This is the only drug or medication approved by the United States Food and Drug Administration (FDA). It can be used by men and women. It is used topically on the scalp but it does not guarantee results and has some side effects

Another surgical method is known as hair transplant which involve the removal of tiny plugs of hair from areas where the hair is growing well and placing them in areas that are balding. Aftereffects can be mild scarring in the area from where hair has been taken and it carries a modest risk for skin infection. This procedure usually requires multiple transplantation sessions and is considered expensive.

Experts say that to encourage hair follicles and promote growth, massage a few drops of rosemary into the scalp and then rinse.

Take 1/2 cup of olive oil and add 3 drops tea tree oil, about 4 drops of rosemary essential oil and 3 drops of lavender essential oil. Gently warm the oil and massage into the scalp. Cover with a hot towel and repeat the hot towel for a couple of times. Leave it undisturbed for around half an hour and then wash it with a mild shampoo to which about 8-10 drops of tea tree oil has been added.

Retrieved from "http://www.copperwiki.org/index.php/Baldness"
Categories: Health And Spirituality | Fashion And Beauty