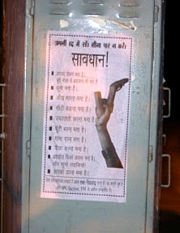 Retrieved from "http://www.copperwiki.org/index.php/Blank_Noise_Project"
Categories: Travel And Culture | Art And Entertainment