Bull fighting is the most traditional of Spanish Fiestas and is considered as art forms which are intimately linked with their country’s history, art and culture. Although is very controversial, bullfighting is Spain’s oldest and best loved national sport.

[edit] All about bull fighting 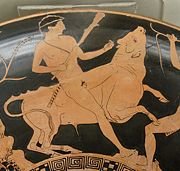 Theseus fighting the Bull of Marathon
The first bullfight took place in celebration for the crowning of King Alfonso VIII of Spain in 711 AD. Ever since, this contest between the Matador (bull fighter) and the bull has been of of Spain's most popular spectator sports.

Bullfighting was originally meant to be an aristocratic sport, in which the bull fighter remained prudently on horseback. King Felipe V took exception to the sport however and banned the aristocracy from taking part, believing it to be a bad example to the public. After the ban commoners accepted the sport as their own and, since they could not afford horses, developed the practice of dodging the bulls on foot, unarmed. This transformation occurred around 1724.

[edit] What happens in a bull fight?

The bull is not an aggressive animal, and the reason he is angry and attempts to charge at the matador whilst in the bullring is mainly because he has been horrendously abused for the previous two days. In fact, what spectators see is not a normal, healthy bull, but a weakened, half-blinded and mentally destroyed version, whose chances of harming his tormentors is virtually nil. The bull has wet newspapers stuffed into his ears; vaseline is rubbed into his eyes to blur his vision; cotton is stuffed up his nostrils to cut off his respiration and a needle is stuck into his genitals. Also, a strong caustic solution is rubbed onto his legs which throws him off balance. This also keeps him from lying down on the ground. In addition to this, drugs are administered to pep him up or slow him down, and strong laxatives are added to his feed to further incapacitate him. He is kept in a dark box for a couple of days before he faces the ring: the purpose of this is to disorientate him. When he is let out of the box, he runs desperately towards the light at the end of the tunnel. He thinks that at last his suffering is over and he is being set free — instead, he runs into the bullring to face his killers and a jeering mob.

The matador is supposed to sever the artery near the heart with one thrust of the sword — in fact, this never happens. It often takes 2-3 times before the creature is mercifully released by death. By this time, the bull’s lungs and heart will be punctured and he always vomits blood. Miraculously, he sometimes attempts to rise again, and gets up on his knees, only to receive further mutilation at the hands of his tormentors. He finally gives up, goes to his knees and lies down. Even then, he is not allowed a little dignity to leave this world in peace, his ears and tail are cut off (often when he is fully conscious), and his broken, bleeding body is dragged around the ring by mules, to which he is attached by an apparatus made of wood and chains. Not content with his suffering, which must be too horrible to describe by words, the crowds boo and jeer him. They even throw empty beer cans at him. His body is then taken away to be skinned, and even then he may not be dead when this happens.

[edit] A Critique of Bull Fighting

There are three main arguments against Bull Fighting. Firstly, it is cruel and barbaric. Secondly, it inflicts pointless suffering on the animals involved. Thirdly a bull can only "be used" once.

There is virtually no feasible argument against bullfighting regaurding the rights and safety of animals, for it is inhumane, painful and cruel to the bulls involved. The bulls are bred to die.

Bullfighting cannot be defended other than the argument that it is a part of Spain's culture.

In 2004, Barcelona declared itself "an anti-bullfighting city," and earlier this year an animal-protection law prohibiting new bullrings went into effect throughout the entire North-eastern region of Catalonia.