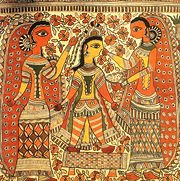 There is a caste hierarchy involved in the making of Madhubani paintings. The Brahmins, people of the highest caste, can depict images of Gods and Goddesses and use all kinds of bright colours such as red, yellow, blue and lemon. The second in the hierarchy are the Kayasthas, who are also allowed to paint religious themes and motifs, but may use only red and black colors. The lowest caste, called the Dusadhs, are not permitted to make religious paintings. Their style of painting called the Godhna or Tattoo art usually depicts flora and fauna in repetitive motifs.