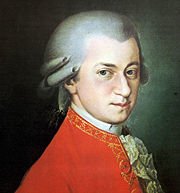 Shortly before Mozart’s death, an unknown messenger had arrived at his doorstop and ordered him to write the Requiem. Many of the elements had been placed in the biography written in 1808 when Franz Niemetschek published this biography. Mozart never undertook work without consulting his wife and it was she who suggested he take up writing this requiem. Mozart was already suffering and was sick at this time. Yet he keenly worked on this piece of work. But his illness visibly increased and he grew more and more sad. His wife Constanze saw this. One day as they were driving in a carriage, this sensitive man had tears in his eyes and said: “I am only too conscious that my end will not be long in coming.” Hearing this, his wife removed the transcript of the Requiem from him. On the day of his death he asked for the Requiem to be brought to him. “Did I not say that I was writing this Requiem for myself?” And carefully looked at the whole score with moist eyes. It was a last glance at his immortal art.

Retrieved from "http://www.copperwiki.org/index.php/Mozart%27s_Spiritual_Life"
Categories: Health And Spirituality | Art And Entertainment