Navjot Altaf is an artist living and working in Mumbai and Bastar. For the past two decades she has produced sculpture and video installations addressing violence in individual and collective memory in India and other parts of the world (e.g. the communal riots in Bombay in 1993 following the Babri Masjid demolition in Ayodhya in 1992-3 and attacks associated with the rise of right-wing fundamentalism in India) at museums and galleries in Mumbai, New Delhi, Fukuoka, London, Liverpool/Bolton, Berlin, New York and other places. Beginning in the early '90s she produced a series of cooperative works with composers, musicians, documentary filmmakers and craftspeople. These led her in turn to develop a series of interactive/collaborative projects in Indian villages, revolving around the design and creation of water pump sites and children's temples (Pilla Gudis) in collaboration with Adivasi artists from Bastar, Chattisgarh in central India. 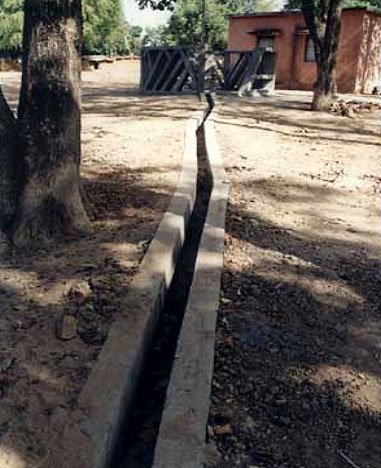 The Pilla Gudis emerged from the realization that village children had no space of their own where they could go to play or engage in other activities outside school hours. They are designed as meeting spaces in which young people could interact with each other and with community members with knowledge of oral and artistic traditions in their village (as well as visiting and invited artists from throughout India). Such interactions are aimed at encouraging the young to think about different ways of knowing and modes of working, enabling them to draw nourishment and sustenance from difference and similarities. The mainstream education system in India neutralizes cultural difference in the hope of creating a sense of 'Unity in Diversity' which affects student's perception of culture. The idea, Altaf notes, is to "encourage young minds to be able to question and take decisions, rather than merely receive. This will also help the artists engaged with the activities to free themselves from taking a stereotypical position of a teacher."

Seven local women artists, and inhabitants at different levels, have participated in the process. For Navjot’s project, organizing the art workshops for the young is as important as creating the sites (Pilla Gudis). It encourages a communication network between artists from different cultures and disciplines from within Bastar and outside and with and between the young. The plan is also to invite social and cultural volunteers, college students, teachers, workers, peasants, hawkers and others to participate. They can in many ways share their experiences of belonging to different cultural and economic backgrounds and how or whether they are knowingly dealing with the issue of migration in present times. The Adivasi areas around Kondagaon, now part of the new state of Chattisgarh, are no longer remote. Her Adivasi colleagues see themselves as interventionists in their own environment. The nature of their intervention, perhaps can be better understood from the intentions of their concepts, questioning, and ways of carrying out the work at public sites. Process, though time consuming, helps in learning about the subtle and complex ways of different local cultures.

Altaf's water pump sites are also produced in collaboration with craftspeople and children. Her concern of designing and transforming the sites is, firstly, to create drainage and to improve hygiene since the local municipality does not provide this facility. Secondly, the aim was to design shelves for women to place their vessels on, to avoid weight on the bent leg before placing it on their head (according to doctors a particular bent leg posture harms the back over time). Thirdly, she aimed to beautify the public sites where women, children, and men of all ages come for a mundane job, like fetching water, as many as ten times a day for domestic or other usage.

[edit] Cultural Background of the Project

The nalpar (handpump) is a much frequented place in Bastar’s Kondagaon village. Women, children, village elders and domestic animals visit it at least 10-15 times on a daily basis. And these days there is an added attraction — a piece of installation art encircling the pump made by seven tribal women artists Shakila Baghel, Anita Baghel, Shantinag, Lata Baghel, among others, along with Navjot Altaf. ‘‘The zig-zag patterns that are part of this structure around the pump is an adivasi motif for water,’’ explains Altaf, of her collaborative installation tucked away in the heart of Chattisgarh. For more, see Article in the Hindu

This project is just one more example of the collaborations that Indian contemporary artists have been undertaking with craftspersons and tribal artists for a while now. And it raises, yet again, a whole slew of dilemmas ranging from more immediate issues like authorship, the level of dialogue between the collaborators, the final work and its life after, to where it is displayed and what happens to the money generated from it. And increasingly questions are being raised, as to whether such artistic collaborations are collaborations in the true sense, as in whether there is an equal exchange of ideas and funds, or is it that that the Artist assumes a superior position? However, though such questioning hold merit, they don’t take away the manner in which Navjot Altaf, has succeeded in bringing in positive social change in Bastar, through her sustained endeavor to make art more meaningful. Sponsored by IFAD (Indian Funds for Agriculture Development), the Chattisgarh project and others which Altaf has been engaged in Bastar since the Nineties, is quite evidently initiated by her. But the level of participation in the handpump installation at Bastar has been very high from the local people — it involves their ideas and addresses, their everyday needs.

Retrieved from "http://www.copperwiki.org/index.php/Navtoj_Altaf"
Categories: Travel And Culture | Art And Entertainment