Cotton grown without the use of any synthetically compounded chemicals (like pesticides, growth regulators, defoliants etc) and fertilizers is called Organic Cotton. 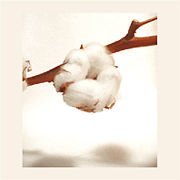 As per the Organic Cotton report for spring 2006 from Organic Exchange, the California based non-profit organisation, which promotes organic cotton acreage and consumption globally, India produced 9,835 tonnes of organic cotton or 31.71 per cent of the world clean cotton production in 2005-6, compared with leading producer Turkey's 10,160 tonnes or 32.76 per cent of world production.

The Origins of Organic Cotton

From its initial cultivation in the Indus valley and South America in 3000 BC, up until the 1950s, global cotton production occurred predominantly without the use of hazardous agrochemicals. For some 5000 years, cotton pests were controlled by agricultural management and tillage practices. Pest cycles were taken into consideration before planting and at harvesting, crop rotations were used, and cotton was planted at lower densities to reduce the impact of pest populations.

In India, until the early 1900s, traditional crafts like Block Printing on Textiles, Kalamkari and Khadi, were usually made using Organic Cotton.

Soon after the Second World War, a number of newly discovered neurotoxic chemicals such as DDT were introduced as an alternative means of pest control. These were much cheaper and were immediately effective, so cotton farmers began to use these and former methods of pest control were largely abandoned.

Conventionally grown cotton became the most pesticide-dependant crop in the world, accounting for 25 per cent of the world’s pesticides. This propelled the resurgence of interest in Organic Cotton

The Problem with Conventional Cotton Production

Consider these facts about ordinary cotton --

How to Grow Organic Cotton?

Weeds have to be removed manually or mechanically since chemical weed killers cannot be used. So they are controlled by a combination of cultivation, flame weeding, and other farming practices. A wide variety of insects attack cotton. Management options include trap cropping, strip cropping, and managing border vegetation to encourage high populations of native beneficials. Certain bio-pesticides using bacteria, viruses, and fungal insect pathogens are available as insect control tools.

Certification of organic cotton production adds credibility to the final product, assures the buyer of the organic status of the product and encourages payment of premium prices to farmers who engage in organic practices. When a grower or processor is certified organic, an independent organisation has verified that the company meets or exceeds defined organic standards. Certified organic farms are inspected regularly and must maintain comprehensive records of their production methods.

Certification programmes and standards vary, especially in response to regional differences, although there are general underlying concepts. However, most Organic Cotton certifications ensure two basic facts. First, that all fibres must be natural and grown organically. Second, every step in the process of cotton production (spinning, weaving, washing, etc.) has to meet certain criteria of environmental responsibility.

However, many countries do not have certification facilities for Organic Cotton growers yet. They have to rely not only on certification by outsiders but also on the price premium decided by the certifiers.

Retrieved from "http://www.copperwiki.org/index.php?title=Organic_cotton"
Categories: Fashion And Beauty | Business And Politics | Science And Technology