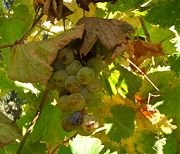 Red Wine is made from about 40 different grape varieties across the globe. Here are some of the most popular ones --

Pinot Noir may just be one of the world's most versatile food wines. By and large, these wines are characterized by smooth and richly complex notes and a light to medium body and colour. They have fewer tannins than Cabernet Sauvignon or Merlot. Wine connoisseurs say that Pinot Noirs exude the flavours of baked cherries, plums, mushrooms, cedar, cigars, and chocolate. Pinot Noirs are best paired with poultry, beef, fish, ham, lamb and pork. They go well with creamy sauces and spicy seasonings. Pinot Noirs draw inspiration from the red Burgandy, one of France’s best known and loved wines. Today, Pinot Noir grapes are grown in Oregon, California, New Zealand, Australia, Germany and Italy.

I shall wet thy lips, parched by the winds of deprivation…know me, for I am ZINFANDEL...

Zinfandel originated from vineyards in Croatia, and has a relatively fuller body with sweet berry-like or spicy flavors. It pairs well with moderately spicy meat dishes and casseroles. Many refer to this grape as America’s heritage grape, and some of the best Zinfandels come from Napa and Sonoma Valleys in California.

Syrah or Shiraz wines have a deep, strong flavour with strong tannins and complex flavours. Connoisseurs suggest pairing these wines with rich meats, for they have a notes of berry, plum and smoke. Known as Shiraz in Australia and South Africa, and Syrah in France, Argentina, Chile and the United States, this wine has one of the highest wine serving temperatures (65 degrees Fahrenheit)

Merlot has a medium to full body, with flavours of blackberry, baked cherries, plums, chocolate, and mocha. It is one of Australia's most important red grape varieties but is best known in its homeland of Bordeaux in France, where it is used to make some of the world's greatest and most expensive wines. Pasta, roasted meats or Mediterranean vegetables compliment Merlot beautifully.

Cabernet Sauvignon is one of the most popular red wines today, enjoyed for its depth of flavour, aroma and ability to age. It is full-bodied with noticeable tannins and cherry or blackcurrant notes. With age, these notes mellow into distinct nuances of cedar, violets, leather, or smoke. Typically, aged Cabernets have much smoother tannins as well. This grape is the most widely planted and significant among the five dominant varieties in the Medoc district of France's Bordeaux region. With age, its distinctive black currant aroma can develop bouquet nuances of cedar, violets, leather, or cigar box and its typically tannic edge may soften and smooth considerably.

It is the most widely planted and significant among the five dominant varieties in the Medoc district of France's Bordeaux region, as well as the most successful red wine produced in California.

For a cheat’s guide on correct pronunciations of wine names, go to http://www.robilio.com/id2.html

[edit] How to Taste Red Wine

Here are some standards by which wines are gauged.

A wine is always said to have an aroma, or nose - which, in lay terms, is how it smells. Wine tasters swill their wine around, and then inhale its aroma. Wines may have floral, citrus, woodsy, buttery, oak, vanilla or many other scents. The aroma of a wine depends on the grapes used, the winemaking process and the storage conditions. In aged wines, the aroma is often referred to as the bouquet.

A good wine has a balance of flavours – it contains acids, alcohol, tannins and of course an overall flavor. Tasters gauge whether one particular component overpowers the others, or do all these components present themselves in a harmonious blend.

The tartness of a Wine is referred to its acidity. Some amount of acidity is very necessary as it preserves the wine’s freshness, and sharpens its flavours. Wines that are extra sour are called `tart’ while those that have very little acidity are referred to as `flat’. The acidity of a wine is largely due to the grapes that go into making it.

The body of a wine is basically how the wine feels in your mouth. Does it taste heavy or light, are its flavours concentrated or mild? So a full-bodied wine will be one in which flavours taste intense, almost concentrated. A light bodied wine in contrast, would feel as light as water in the mouth.

For more on exactly how to `taste’ a wine, go to http://www.killerby.com.au/rituals_4steps_tasting.htm

[edit] How to tell when a Red Wine has gone Bad

There are a number of things to look for if you suspect that your bottle is not what it should be.

Red Wine has many amazing health benefits, which is great news for those who drink it in moderation. Here are some of its proven effects on health –

Resveratrol is a chemical similar to the human hormone Estrogen which is found in abundance in Red Wine. It protects grapes against fungal infections. In humans, however, it has even more valuable effects. It functions as an powerful antioxidant and anticoagulant (blood thinner). Additionally, it also has anti-inflammatory and is considered to inhibit certain cancers.

Some researchers have previously suggested that it would be beneficial to supplement people's diets with resveratrol because of its anticarcinogenic and anti-arteriosclerotic properties. It has also been suggested as treatment for breast cancer and postmenopausal osteoporosis.

The antibacterial properties of wine have been known since ancient times. Both red and white wines have been used to treat wounds, cuts and abrasions, though red wine has been seen to be more effective. Researchers have found that red and white wines are also effective in inhibiting the growth of several strains of streptococci bacteria that are involved in tooth decay, and some cases of sore throat. These anti-bacterial qualities are because of the acids that wine contains. In fact Professor Gabriella Gazzani and colleagues at the University of Pavia in Italy have researched this issue and have come to the conclusion that wine could actually make a good antibacterial mouth wash to fight tooth decay and a sore throat. They have stated in an article in the Journal of Agricultural and Food Chemistry that wine can be used to combat harmful oral bacteria.

Red Wine also contains Melatonin, a hormone that promotes sleep and lowers anxiety. Newsweek called this compound “the all-natural nightcap”, as it helps set the body clock or circadian rhythm. Research suggests it could do everything from slowing the aging process, to protecting the immune system. So, a glass of red wine may be the best way to unwind or relax – just in case you needed science to tell you so!

[edit] Tips on How to Remove Those Red Wine Stains

Here are some tried and tested home remedies –

For Stains on lips and teeth

which will remove the red wine stains from lips and teeth. This is great for a night out on the town! [1]

There are some home remedies and beauty treatments that you can use without visiting an expensive spa or buying lotions and potions. For example, wines make post-shampoo great hair rinses – use champagne to give your hair definition, red wine for dark hair and white wine for blond.

Selfridges in London stock Davi Skin a line of luxury skincare for men and women. This includes Le Grand Cru (priced just under £100) an anti-aging face cream that nourishes the skin with antioxidants found in fermented grapes. In addition, the collections include a daily lotion, SPF 30 for women and SPF 15 for men, and a cleanser. The company is founded by Carlo Mondavi – the grandson of winemaking icon Robert Mondavi with vineyards in California. No prizes for guessing where they get the grapes from!

Daviskin is founded by Josh LeVine and none other than For more information, visit http://www.daviskin.com

What is the ideal temperature for wine?

Reds should be drunk at a temperature slightly lower than room temperature (about 65 degrees). In fact, younger fruity reds benefit from chilling, as it tones down the sweetness of wine. If a red wine becomes too warm, it may lose some of its fruity flavor.

Should I ever use a decanter for my wines?

A decanter is used mainly to remove sediment from older red wines. Also, it can be used to open up (aerate) young red wines. Otherwise, wine will “breathe” enough in your glass and decanting is not necessary.

Why should I swirl wine in my glass before I drink it?

When you swirl wine in your glass, it incorporates oxygen into it. This allows its aomas to develop fully. That is why the trick is to give your wine a nice longish swirl before drinking it.

How should wines be stored?

Ideally, wine bottles should be stored in a cool place, lying on their sides, so the wine is in touch with the cork. If a bottle stands for too long, the cork will dry out and air may leak into the bottle, interacting with the wine changing the taste, and eventually turning it into vinegar.