Jump to: navigation, search
The tropical rain forest is a forest mainly of tall trees, most of them in regions between the Tropic of Cancer and the Tropic of Capricon. These are areas of year-round warmth. The temperature in a rain forest rarely gets higher than 93 °F (34 °C) or drops below 68 °F (20 °C); average humidity is between 77 and 88%; average rainfall is 50 to 260 inches in a year. There are no pronounced cold or dry spells. 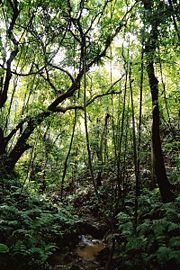