The cherry fruit is round and shiny with a depression at the top. THe colour can range from a pale to a dark red. White and yellow varieties also exist but are not so common. The ceery has a single stone or seed. Two varieties of cherries are found, the sweet and the sour variety.

The cherry belongs to the family Rosaceae, genus Prunus. Cherry trees can range in size from 6 to 30 feet, depending on the variety.

Cherry cultivation dates back to 300 B.C. The name originates fom the Greek language and means 'for the birds', because brids love this fruit.The tree was greatly valued by the Egyptians, Greeks and Romans for its flowers and its fruit.

The most popular variety of the cherry is the Bing cherry, developed by Seth Luelling in Oregon. He named the cherry after his Manchurian foreman. Several varieties of cherries exiext today and they are mostly picked by hand. 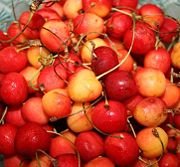 Cherries have many health benefits. They contain a poweful combination of anti-ageing antioxidants and are full of fiber, vitamins A, B and C, and lots of minerals such as calcium, iron and potassium. Cherries have no fat. They are also good forpurifying the blood and for boosting energy.

The tart variety contain anthocyanins and bioflavonoids. These compounds help to relieve and prevent arthritis and gout. They also reduce pain and inflammation as well as eliminate migraine. These compunds have an effect similar to aspirin.

Cherries are a rich source of antioxidants. They prevent and repair the damage caused to the body’s cells by free radicals. Cherries are rich in a flavonoid called queritrin that is one of the most potent anticancer agents. Eating cherries sets this flavanoid free to fight off the body’s cancerous cells.

Perillyl alcohol (POH) is another compound that is found in cherries and is also very useful in preventing all types of cancer. POH stops the growth of cancer cells by depriving them of the proteins they need to grow. Research has shown that it has worked on every kind of cancer that POH has been tested against.

Cherries are also rich in two other flavonoids -- isoqueritrin and queritrin. These flavanoids are antioxidants that eliminate the byproducts of oxidative stress and slow down the process of aging.

Sweet cherries are an excellent source of boron, which, when coupled with calcium and magnesium improves bone health.

To store cherries, place unwashed cherries in a plastic bag in the refrigerator. Wash them just before eating. Sweet cherries taste much better at room temperature so it is a good idea to take refrigerated cherries out atleast an hout before they are to be eaten. Fresh cherries should be consumed within four days.

[edit] How to Freeze

Always pit cherries before freezing. The pit will give it an almond taste if frozen with it. You can freeze fresh cherries, but they should be pitted first, otherwise they will take on an almond flavor from the pit. It is wise to be careful while pitting cherries as cherry juice stains clothing.

Whole, pitted sweet cherries cab be preserved in a syrup made with 4 cups water and 3 cups of sugar along with with 1/2 teaspoon of citrus juice (per quart of liquid).

Cherries can also be pitted and frozen without liquid in airtight plastic.To prevent cherries from sticking to each other freeze separated cherries on a sheet of foil and then pack in bags for freezing.

Sour cherries can be frozen by adding 3/4 cup of sugar to every quart of pitted, whole sour cherries. They shoild then be pack in airtight containers with 1/2-inch space for expansion or in airtight bags. Frozen cherries will last as long as ten to twelve months in the freezer.

When using cherries in cakes and other baked goods, you might notice a blue discoloration around the cherries. This happens because a chemical reaction takes place between the cherries and the baking powder or baking soda. To prevent this discoloration, substitute buttermilk or sour cream for milk in the recipe.

Pure almond extract(1/4 of a teaspoon) added to cherry mixtures really brightens the cherry flavor. To plump up dried cherries cover them with hot water and let them stand for about thirty minutes.

[edit] Add to your diet