Jump to: navigation, search
Could our oceans be getting `loved to death'? Consider some facts -- Over half of the 46,000 km coastline of the Mediterranean has been built upon. Hotel, beach front villas and holiday homes have replaced the very beaches that tourists thronged to. In the oceans of Thailand, the coral reefs are bare and bleached, mangroves and sea grass meadows have disappeared and nesting grounds of turtles have been destroyed. Even the Great Barrier Reef in Australia is reeling under severe environmental and marine damage. 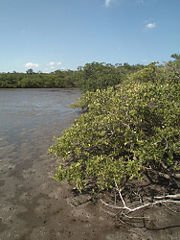 Call it being `loved to death', or call it the systematic destruction of our oceans -- the fact is that today our oceans are in danger. From divers touching coral reefs, to people littering on beaches, to boats dropping anchors -- everything affects the marine ecosystem. If we want our grandchildren and their children to enjoy a beach holiday or go snorkeling amongst coral reefs in the Andamans, we have to act now. Marine ecotourism -- responsible tourism along or in the coastal zone that supports the local ecosystem, is economically viable and preservative in nature -- is the need of the hour.

There is a whole range of activities possible in and around the beach, that need not imapct its ecology. The challenge is in always being mindful of the delicate balance on which marine ecology hinges.

Marine Ecotourism is a large chunk of the global tourism market, which is considered to be the largest industry today, worth billions of dollars and employing more than 10% of the global work force. It is important to accept the fact that this tourism traffic is not going to decrease in the near future. The only way to sustain this growth is to make it as eco-friendly as possible, and to ensure that every beachside vacation also ends up supporting local marine conservation projects along with adequately supporting the local people and their way of life. 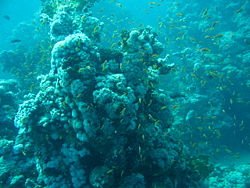 The other side of the spectrum involves:

For any Marine Ecotourism project to work, it is important to ensure that the needs of both people on both ends of the spectrum are met.

The Idea of a responsible Marine Ecotourism holiday is that it should allow the visitors to enjoy the surroundings in a way that is minimally intrusive or destructive to the locations. It should also sustains and support the local cultures where one is. Thus it becomes a responsibility of everybody involved- from the tourist to the local service provider and the local population.

[edit] How We Can Help

[edit] Some Questions to Ponder Over

The rise of carbon dioxide emissions and the resultant climate warming from the burning of fossil fuels are making oceans warmer and more acidic. Acidification threatens all marine animals and plants with calcareous skeletons, including corals, snails, clams and crabs. One study shows that levels of CO2 could become unsustainable for coral reefs in as little as five decades. This threat to the coral reef ecosystem can expose people to flooding, coastal erosion and the loss of food and income from reef-based fisheries and tourism.