The threat to the world's food security has again brought hunger at the top of the humanitarian agenda. The UN World Food Programme has called the present Food Crisis a “silent tsunami”. Food stocks worldwide are at a frighteningly low level. There have already been riots and protests in over 30 countries from Haiti to the Philippines. The price of rice has tripled in a year. And a new breed of bandits have emerged in Thailand – the rice bandits.

The crisis resembles the one which came to a head in the early 1970s and caught most agronomists and food-policy specialists by surprise.

According to the United Nations Food and Agriculture Organization’s (FAO’s) widely accepted definition, “Food security” means that food is available at all times; that all persons have means of access to it; that it is nutritionally adequate in terms of quantity, quality and variety; and that it is acceptable within the given culture. Only when all these conditions are in place can a population be considered “food secure.”

Symptoms of the present food crisis have been there for all those who cared to see. They started manifesting in the food riots and farmland prices rising faster than faster than real estate prices in cities like Manhattan. Today there are more hungry children in the world than there are Americans.

One of the major causes is that all governments took their eyes off agriculture. Over the years development banks, aid agencies and donors cut in half the aid devoted to agriculture. Developing countries too are guilty of not investing enough in agriculture.

The main reasons attributed to the present food crisis are:

While the average rate of inflation in emerging markets is 7.3 percent, global inflation is expected to rise from 3.5% to 4.9% this year.

The effects of globalization brought about rapid economic development in many countries worldwide. This led to an increase in global trade and consumption of high value food and other consumer goods.

The unprecedented growth and industrialization in countries such as China, India, Brazil and the middle East increased the demand for oil as an effect of the rise in the number and use of vehicles, their more capital intensive production methods.

Enhanced demand for dairy and meat increased the need for animal feed production. Already 30% of the world grain supply is used to feed livestock, and this demand is putting more pressure on overall food security.

Farmers who grew food for humans are now doubly busy growing food for cars. The US Government is encouraging farmers to turn their field over to produce ethanol.

In agricultural products mechanical cultivation, processing and transport increased considerably. Fertilizer prices have increased by 150 percent in the past five years and contributed to considerably raise grain prices since the cost of fertilizers accounts for 25 to 30 percent of the overall cost of grain production in the US, which supplies 40 percent of world exports of grains.

Combined with these causes the sharp drop in the exchange rate of the US dollar against the Euro, the Japanese Yen and several other currencies raised the prices for consumers and producers in the US and in countries that linked their currencies to the US dollar.

The US exchange rate dropped mainly because of the financial crisis that started in the US banking system and spread to many other countries, including the EU and Japan.

Countries at risk of hunger 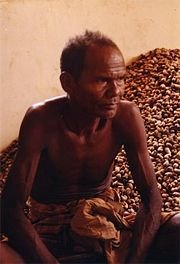 According to the World Bank estimates, food prices have doubled over the last two years. This has the potential to push 100 million people throughout the world into extreme poverty.

Even now to the population of one billion people who subsist on less than $1 per day, and the 162 million out of them on less than $0.50 per day, even a slightly marginal rise in food prices will be nothing short of disaster.

Even the poorest section of people in America spend 15-16 percent of their income on food. The poor in developing countries spend 60 to 80 percent, or more, of their income on food, according to the International Food Policy Research Institute. Overall, increased food prices particularly affect the poorest people within developing countries. Among the populations affected by current food insecurity and price increase are people in Haiti and Tajikistan.

Current price rises mean that the world’s poorest people will have to spend a larger proportion of their income on food. This may mean they will buy less food, or food that is less nutritious, or they may have to rely on outside help to fulfil their nutritional needs.

Populations in many in urban areas, who had thought themselves secure in their food supply are now unable to afford basic foodstuffs.

UN's World Food Programme, with voluntary contributions from the world's wealthy nations, feeds 73 million people in 78 countries. But this is less than onetenth of the total number of the world's undernourished.

The UN is planning to set up a special task force to address the issues of food shortage and price rise across the world. Though the World Food Programme has already pledged $475m (£240m), the world body feels there is a further need for $775m (£382m). Without such funding it will be almost impossible to prevent widespread hunger, malnutrition and social unrest.

The UK is initiating of new steps to scale back the country’s commitment to bio-fuels which is believed to have exacerbated the food crisis.

The Government has also decided to allocate £400 million over five years to research into hardier and higher-yielding crops. It also promised £30 million to the World Food Programme for countries where the risk of hunger is greatest, plus £25 million in aid for Ethiopia alone.

To keep rice affordable in local markets, big producers such as Vietnam and India have restricted exports — further driving up the international price.

Intergovernmental Panel on Climate Change (IPCC) has indicated that increasing temperatures and extreme weather patterns in Asian countries are already taking their toll on crop yields which are declining in many parts of the Continent. If this trend continues it would put close to 50 million extra people at risk of hunger by 2020. There would be a further addition of 132 million and 266 million by 2050 and 2080.

Unless decisive steps are taken to reduce greenhouse gas emissions, temperatures could rise by 5oC by 2080. The study found that for every 2oC rise in temperature in China there would be a decrease in rain-fed rice yields by 5-12%. In South Asian countries the same condition is expected to decrease production by 4% to 10% by the end of the century.

The demand for bio-fuel is the most fiercely controversial factor that contributed to the present problem of food security. In the US, which has set a target of producing 7.5 billion gals of renewable fuel use in gasoline by 2012, bio-fuel is produced primarily from corn. In the European Union 80 percent of bio-fuel production is bio-diesel produced from rapeseed, soy and increasingly also from palm oil imported from East Asia.

Generous incentives are given to farmers that grow corn for ethanol in the US and soy and rapeseeds for bio-diesel in the EU. The US not only provides large subsidies to this sector but also extends tax credits and tariffs on competing (and cheaper) imports of ethanol, mostly from Brazil, in order to protect the domestic producers.

Low-income countries are also concerned about price increases for grains and oilseeds as these commodities constitute a large share of their citizens’ diets. Low-cost grains are a dietary staple in the poorest countries. In low-income Asian countries, grains account for an average of 63 percent of the diet; in North Africa and Commonwealth of Independent States (CIS—11 former Soviet republics), about 60 percent. In Sub-Saharan Africa, the region most vulnerable to food insecurity, grains account for nearly half of the calories consumed. The share of grains in the diet is lowest—about 43 percent—in lower income Latin America. In all regions, the situation varies by country. For example, in Bangladesh, the share is 80 percent, while in Eritrea and Ethiopia, both among the most food-insecure countries in the world, the share is around 70 percent.

Higher incomes have made processed foods more accessible. As a result The vegetable oil share of diets in low-income countries has risen considerably. For example, in Sub-Saharan Africa, the share of vegetable oil increased from less than 8 percent of the diet in 1980 to 12 percent in more recent years. In lower income Asian and Latin American countries, the share is now roughly 10 percent, up from 5-7 percent in 1980.

However, now global demand for food aid is outpacing world availability. Food aid which constituted 20% of global aid flow, has now come down to 5%. When food aid started in the 1950s, US and canada accounted for over 90% of global food aid. This continued till the the 1970s when the United Nations World Food Programme (WFP) became a major player.

There are 3 types of food aids:

These are aids gwhere food is distributed free in emergency situations, such in cases of war, natural disasters, etc. However, some countries which face chronic food insecurity have also become permanent recipients of this form of aid.

These aids are distributed with the purpose of promoting agricultural or economic development, nutrition and food security, such as food for work and school feeding programs

Many believe that genetic engineering is the technological way to increase food output, reduce the use of fertiliser and save us from the food crisis. As GM crops contain genes from other organisms to make the plants resistant to insects, herbicides or disease, many countries are said to be rethinking their bans on genetically modified food, in the expectation that the new crop will help ease the problems of food security.

Wheat growers and marketers in the US, who were once hesitant about adopting biotechnology because they feared losing export sales, now want to adopt the technology to bolster supplies.

The group, which once cautioned farmers about growing biotech wheat, is working to get seed companies to restart development of genetically modified wheat and to get foreign buyers to accept it.

Countries like the UK too are considering developing higher-yielding and climate resilient varieties of crop. Some manufacturers in Japan and South Korea are for the first time buying genetically modified crops for soft drinks, snacks and other food production.

At the 1996 World Food Summit, 186 countries pledged to reduce the number of hungry, food-insecure people in the world by 50 percent (to 400 million) by the year 2015. This was one of the greatest demonstrations of worldwide commitment to improve global food insecurity.

Progress toward this goal has been slow, with a decrease of only 2.5 million people a year since 1992. At the current pace, the goal will be reached more than one hundred years late. Despite slow progress, some innovative programs have been implemented around the globe to combat food insecurity and undernutrition.

To ensure food security, food must be available, properly utilized and distributed at the national, regional, and local levels. To achieve this it is necessary to produce or import sufficient quantities of nutritious food. It should also be available at a price which the poor can afford.