Introduction to the Approach and Purpose

The Human Centred approach to Psychotherapy grew out of a need to bring in the human being or the client in the vortex of the therapeutic process. Therefore it is also called person-centred or client-centred psychotherapy.

Background to the development of Human Centred Psychotherapy

It became increasingly apparent that the formal and often detached role played by the therapist in psychoanalysis did not provide a very conducive or nurturing environment for the treatment procedure to take place.

Maslow’s Theory of Self Actualisation

In the subsequent rungs more and more psychological needs, each more complex than the other are listed; like the need for acknowledgement. These needs finally end at the highest point, the need for self-actualization.

Carl Roger’s theory is one that grew out of two influences:

Rogers was the first thinker to point out the concept of organismic valuing. This he said was a product of the evolution process which helped humans place higher regard or value for those things that enhanced the chances for survival. Thus the concept of good and bad came about. All good things promoted survival. The opposite was true for things considered bad.

The Concept of Postive Regard 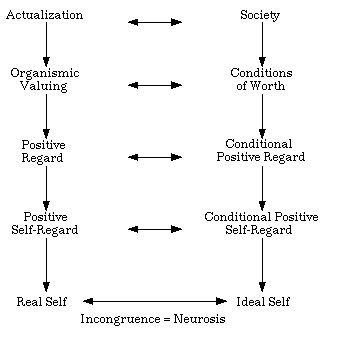 Carl Rogers not only spanned a huge and a new body of work, but also pioneered a new form of therapy called the Rogerian Therapy.

Rogers client centered theory did not end with him. Rather it led to a whole body of work in this area which tightened its philosophical leanings. A lot of emphasis has been put also on the therapist because although he plays a supportive role, the entire process does revolve around him.

Retrieved from "http://www.copperwiki.org/index.php?title=Human_Centred_Psychotherapy"
Categories: Health And Spirituality | Science And Technology