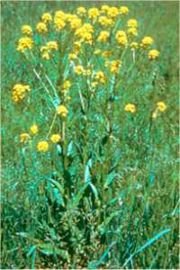 Mustard is a member of the Brassica plant family which has tiny round edible seeds. The word mustard, is derived from a play of the of the Latin word, mustum ardens meaning burning wine because of its properties.

All parts of the mustard plant are edible, including seeds, leaves, and flowers. One of mustard's greatest health benefits is that it provides tremendous flavor for very little calories and little fat. A gram of mustard flour contains just about 4.3 calories. This is what makes it a great condiment the world over.

The mustard is a well-known oil seed. It is a small annual plant, which grows up to a height of one mt. with some branches. It has a round stem with long inter modes, and very soft yellowish green leaves. The fruit is a pod, about 2.5 cms in length containing the seeds. Dry mustard seeds are small, measuring about 1 mm in diameter. They are round and darkish brown or grayish brown in colour. They have no smell, but when pounded and moistured with water, they emit a peculiar pungent odor. The taste of the mustard seeds is bitter and pungent.

Black mustard is a native of Eurasia. It has been in cultivation in Europe for a long time. Romans, Greeks and Indians used it since ancient times. The plant is cultivated as a field crop in most temperate countries.

The mustard seeds are used as condiment throughout the world. The seeds yield 28% of a fixed oil, which is used in the manufacture of medicine and soap making. The seeds also contain about 1% of a volatile oil, which is used as a counter irritant when greatly diluted. The oil extracted is used for cooking, frying and as hair oil. It is also used to make pickles and salads. Even the leaves are used as vegetables.

The essential oil Tocopherols present in mustard inhibits growth of certain yeasts, molds, and bacteria, enabling mustard to function as a natural preservative.

Mustard in the Kitchen

Mustard has multiple uses in the cooking process.

Mustard seeds as well as its oil are used in many prescriptions for the treatment of various ailments.

A handful of white mustard seeds are roasted in a lt. of sesame or coconut oil. The oil is strained and cooled. It is then applied with a little water over the face before going to bed. It helps cure pimples and whitens the complexion.

Mustard oil boiled with henna leaves is useful in healthy growth of hair. About 25 grams of mustard oil should be boiled and a little quantity of henna leaves should be gradually put into the oil. The oil should then be filtered through a cloth and stored.

Mustard is a rubefacient, which causes reddening and warming of the skin. Mustard paste with water is applied as analgesic in the case of rheumatism, sciatica, paralysis of limbs and other muscular pains. The plaster should however not be applied directly on to the skin as it can cause painful blistering. A layer of lint material should be put in between the paste and the skin.

A teaspoonful of powdered mustard seeds mixed in a gallon of warm water is used as therapeutic bath in convulsions of children caused by high fever.

Mustard paste as an external application is highly beneficial in the treatment of ringworms. The paste should be applied after washing the skin with sufficiently hot water.

Mustard oil is not directly present in the seeds. Instead, when the seeds are mixed with water it results in a chemical reaction between the enzyme present and a glucoside from the seeds. This produces the oil allyl isothiocyanate.

Things to be careful about

Mustard seeds contain a substance called goitrogens, which can affect the functioning of the thyroid gland. Though it is said that cooking it deactivated the goitrogens, it is still advised for patients with thyroid problems to avoid it.

Mustard allergies are also possible in some people causing a burning sensation of the mouth, tongue, teeth and throat.

Mustard seeds have certain properties which cause severe vomitting.