Pumpkin is technically a fruit that belongs to the Cucurbita family which includes squash and cucumbers.

The pumpkin plant is actually a vine that has large, dark green leaves, orange bell shaped flowers, and small prickly hairs on the stems and leaves. It also has separate male and female flowers on the same plant. The flowers have short lives as they open only for a single day. The male blossoms have pollen that is transferred to the female flowers by bees. Only pollinated female blossoms develop into pumpkins. Therefore, few of the pumpkin flowers actually produce a pumpkin.

Most pumpkin fruits are orange, but some are white, yellow, or other colors. It has a hard outer shell and a coarse stringy pulp inside with the seeds. The mature pumpkin fruit usually weighs 15 to 30 pounds but it can be as big as but some giants may weigh over 800 pounds.

Pumpkin plants have to have adequate spacing when being planted in order for them to grow properly. If plants are too close, the fruit size can be affected. Under extreme stress, tight spacing may eliminate the crop entirely.

Pumpkins have a history going back almost 9000 years. They are said to have originated in Central America. Seeds from related plants have been found in Mexico dating back to 7000 to 5500 B.C. It was known as Pepon in ancient Greece which means large melons. From there, it became pompon in France. The British changed it to Pumpion and finally was called Pumpkin by the early American settlers. References to pumpkins date back many centuries.

Pumpkins are a tasty source of vitamins and minerals, particularly beta-carotene, vitamin C, and potassium. The beta carotene is an excellent antioxidant which is converted to Vitamin A in the body . Current research indicates that a diet rich in foods containing beta-carotene may reduce the risk of developing certain types of cancer and offers protect against heart disease. It also helps against other diseases as well as some degenerative aspects of aging.

It also helps prevent arterosclerosis, or hardening of the arteries, which can lead to strokes and/or heart attacks. 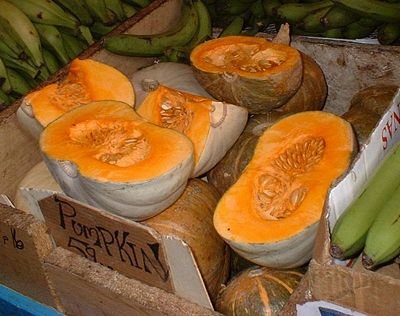 It also helps in fighting arthritis.

One can make about one litre oil from around 2.5 kgs of dried pumpkin seeds. The oil produced is almost black in colour and has Vitamin A and E, Zinc and Omega 3 and Omega 6 that are also known as essential fatty acids.

How to Make your own Roasted seeds

Remove the seeds from the pumpkin flesh and strings. Wash them well (usually putting then in a big bowl of water and rubbing them between your hands is a fast way to clean them) and dry them.Spread the seeds evenly over a cookie sheet and lightly baste the seeds with melted butter or vegetable oil. Place them in oven at 190 degree for about 30 -40 minutes till slightly brown. Sprinkle with salt and serve hot or cold.