One man’s trash is indeed becoming another man's treasure.

North American "urban mines", or landfills, are estimated to contain more aluminum than can be produced by mining ores. The same is likely to be the case of gold and copper, which are used in the circuit boards of computers and electronic gadgets. It's estimated that as much as 40 million tons of copper may be sitting in US landfills at the moment.

One ton of scrap from discarded PCs contains more gold than can be produced from 17 tons of gold ore, according to the US Geological Survey. And every year electronic waste totals 20 million tons. About 50 million computers are discarded annually in the US alone. It is believed the Japanese alone will trash 610 million cell phones by the end of this decade. To see a visual representation of waste generation view the photo essay Inside the Digital Dump [1] 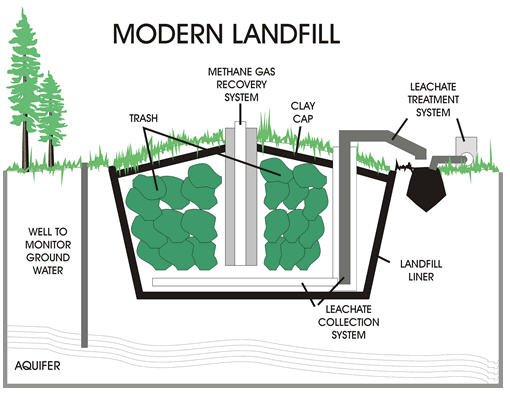 Business interest in tapping into urban mines is on the rise because of all the valuable metals buried inside landfills. We throw away in our landfills enormous resources which could be used for many different systems. It is widely believed that landfills mining would be cheaper than traditional mining. Landfill mining would save money for the mining companies and would greatly decrease the need and growth of traditional mines. This would in turn directly help the environment too.

Mining of landfills was taken up seriously in the 1990s, and many towns in the US tried mining their junk piles for metals and rubber, and burning the leftovers for energy. But with the fall in the market rates in the mid-1990s, landfill mining was no longer seen as economical. With current rising prices landfill mining is again looking lucrative.

The price rise is led by a global building boom. China is already the world's biggest consumer of aluminum, copper, iron, and steel. Its drive to erect big cities almost overnight has caused the market rates for metals to skyrocket. While aluminum prices have doubled in the last three years, gold prices have reached an all-time high. But going by the above figures, there is plenty to dig from the landfills.

In the 1990s landfill mining technology separated the soil from the waste with screens and sieves. The waste would be shredded into very small pieces and magnets used to pull out the ferrous metals. The new approach uses rotors of magnets that spin very quickly, creating an "eddy current" with a strange electrical effect that makes aluminum and other nonferrous metals levitate and eject from the rest of the heap.

Besides metal, landfills are full of methane. Totally it accounts for 13 percent of global methane emissions. This methane gas produced on decomposition of organic waste, can be captured using wells or vacuums inserted deep within a landfill's center. The gas can be used to generate electricity, or piped to nearby industrial operations that require natural gas.

Although landfill gas is primarily a pollutant that needs control, the methane it contains makes it valuable as fuel to power an electric generator. Landfill gas was first used as a fuel in the U.S. during the late 1970s. Since then, the technology required for its collection and use has developed steadily. This method of producing renewable energy is now regarded as one of the most mature and successful in the field of green power.

Mining landfills requires considerable effort and energy, and the compensation is often not adequate. There is not much demand for a number of items to justify the cost. And once paper-based products get contaminated from organic waste such as food scraps and grass clippings, they are of no use.

The proliferation of high-tech waste computers and mobile phones make the practice more viable, but it is a mammoth task to locate the right rubbish and leech out a few worthwhile scraps.

This calls for effective recycling facility to strip valuable components from computer waste before sending them to the landfills.